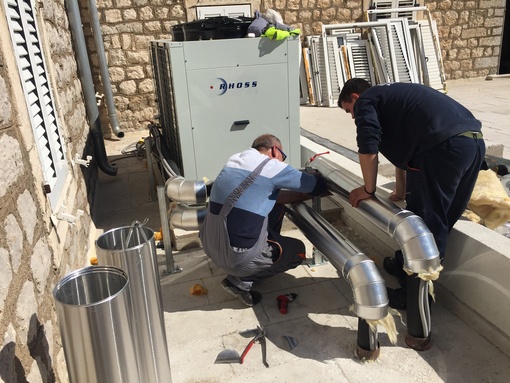 Kotor, Montenegro: Raw seawater for Aquarium Boka tanks will be pumped directly from the sea, from a point in front of the Institute of Marine Biology at a depth of around 15 m. Due to the features of the Boka Kotorska Bay, this was accepted as the only viable solution. After sedimentation, the raw water will be pumped to the fish tanks and processed when/if necessary, in life support systems, each shared by 2-3 fish tanks.

Water temperature appeared as one of the potential problems. While for the most organisms planned to be on display in aquarium tanks the optimal temperature is around 17°C, the unpublished data on seawater quality from 2018 and 2019 indicate water temperature above the optimum during most of the year, with a recorded maximum of 23.9°C in October 2019. As a solution, a water-cooling system was set up on the roof of the Aquarium, consisting of two high-capacity back-to-back thermal pumps (water chillers). The closed cold-water circuit with heat exchangers was assembled in March 2020 by the Ening company from Montenegro. 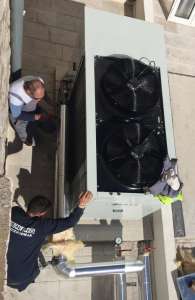 Photo: Mounting water chiller on the roof of the Aquarium Boka in April 2020

The efficiency of the system will be checked during the hydraulic set-up of the Aquarium Boka, now postponed for late summer 2020.