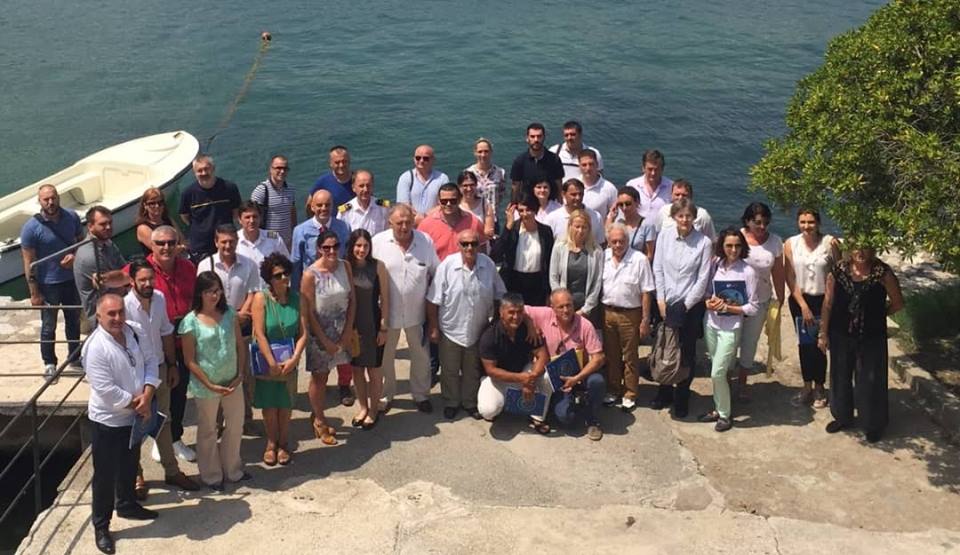 The workshop gathered over 50 participants, mostly fishermen, representatives of municipalities, non-governmental organizations, as well as the line ministry and colleagues of the Institute of Marine Biology.

On June 12, a workshop  “Sustainable Fisheries – Fight against Illegal Fishing” was took place at the Institute of Biology. This is the second of six workshops within the project Monteaqua funded by the Ministry of Foreign Affairs of the Kingdom of Norway and the Norwegian Embassy in Belgrade. The workshop was attended by over 50 participants, mostly fishermen, representatives of municipalities, non-governmental organizations, as well as the relevant ministry and colleagues of the Institute of Marine Biology.

The mentioned workshop is one of the activities of the project “The Boka Aquarium – MonteAqua Biodiversity Conservation Center”, which was made possible by the donation of the Norwegian Ministry of Foreign Affairs. The aim of the workshop is to increase the institutional capacities of Montenegro for the adoption of appropriate legislation and implementation of acts for achieving the full transposition of European legislation in the field of marine fishing and illegal fishing, and as an example of good practice will present Slovenia’s experiences in this process. The lecturers at the workshop are representatives of the administrative and fisheries inspection authorities from Slovenia, as well as representatives of the administrative bodies, that is, the Directorate of Fisheries of the Ministry of Agriculture of Montenegro.

Workshop is based on  the Council Regulation (EC) No. 1005/2008 establishing a Community system to prevent, deter and eliminate illegal, unreported and unregulated fishing – IUU Regulation.

Unfortunately, we are all witnesing that recently illegal fishing in Montenegro is very pronounced, fishery without permission and with the use of explosive and electrical devices (dynamites and aggregates). Illegal and unreported fishing is not a problem that only Montenegro faces, it is a global problem that causes a number of negative economic, social, environmental and legal consequences. This activity is often associated with other criminal activities and endangers the safety of people and food. In addition to the direct threat to human life, the negative impact on fisheries enonomy, the use of dynamite and aggregates and other illegal activities in fishing has a significant impact on the overall environment, which causes permanent and irreparable damage to biodiversity.

The use of dynamite, fishing with unauthorized tools and in forbidden areas, has a very destructive effect on the meadows of the sea grass – Posidonia oceanica, which reflect and represent the vitality of marine ecosystems and which have several key roles in the functioning of marine ecosystems: produce and release large quantities of oxygen, build complex ecosystems give shelter and a place of recovery to many fish and invertebrates of commercial importance, stabilize the seabed and reduce coastline erosion. Due to the importance of the posidonia meadows, and vulnerability that threatens them, posidonia is a strictly protected species in Montenegro by the Decision on placing under protection of certain plant and animal species (“Official Gazette of Montenegro”, No. 76/06), while through European legislation is protected by the Directive on the Protection of Natural Habitats and Wild Fauna and Flora of the European Union (92/43/EEC).

Urška Srnec from the Ministry of Agriculture, Forestry and Food of the Republic of Slovenia has shared her experience in enforcing regulations in Slovenia. She cited specificities in Slovenia and how problems are solved through national legislation in cooperation with the European Commission. Lists of the necessary elements of European Union supervision, such as fishing licenses, identification boats and fishing tools, satellite tracking systems and systems for automatic identification, catch records, overloads and declarations of release. Also, basic steps in the fight against IUU fishing (illegal, unreported, unregulated) are presented, where, in addition to controls at sea, regulatory regulation is equally important to control the market, where the placement of IUU fishing on the market is explicitly prohibited.

Mr. Dusan Varda from the NGO MedCem, Sutomore spoke about the role and significance of protected areas in the sea (PAS)  pointing out that the PAS represents the most effective approach to the protection and restoration of marine ecosystems. It is important to note that in Montenegro there is not yet a protected area in the sea, but there is a  plan of protection  Katič, Platamuni, Ratac, Stari Ulcinj, Tivat solila, the mouth of Bojana and Ulcinj Solana. Mr. Varda once again underline that it is of utmost importance for the local community and the state to join the establishment and management of as efficient marine protected areas.

Ms. Slavica Pavlović from the Ministry of Agriculture and Rural Development, the Fisheries Directorate, stated that the participation of the fisheries sector in the total gross domestic product is 0.5%, and that 80% of the Montenegrin fleet at sea uses coastal fishing tools with vessels of less than 12 meters in length. The main problems in marine fishing are the out-of-date and inefficient fishing fleet, the lack of fleet ports, first unloading sites and first sales, then the use of dynamite and other illicit fishing gear and equipment for the purpose of catching, and the lack of adequate market channels for fish marketing. In order to strengthen the fight against illegal fishing, in June 2017, a Working Group was formed with members from all relevant institutions, an Action Plan was adopted that prescribes duties and activities for all members of the working group and a timeframe for implementation. In the previous period, a number of successful actions were undertaken by the Ministry of Interior, fisheries inspection with the support of all the involved institutions, and especially the citizens group STOP ILLEGAL FISHING.

Dr. Aleksandar Joksimovic, head of the Laboratory for ichthyology and fisheries of the Institute of Marine Biology, said that sustainable fishery means that each of us must be responsible for the implementation of everything that he is competent to do. Dr. Joksimović emphasized that it is very important that scientific data are  gathered in the right way and then presented to decision makers, becuse decision-making on such an important issue as fisheries, without exact data on biomass fish, its movement and all other aspects of our research is simply not possible. He also emphasized that the representatives of the Institute of Marine Biology are very active in allrelevant  bodies in which they participate, such as the General Fisheries Commission for the Mediterranean and the EU. The Adriatic is one  sea and it is not possible to make decisions individually at the state level, but joint action is necessary, data exchange and joint activity and initiatives which would sustainably develop our fishery and contribute to the preservation of the unique Adriatic Sea, which Dr. Joksimović has had.

Participants of the workshop during the discussion, as the biggest problem of illegal fishing, listed the dynamite and a large number of fishermen who were fishing without a fishing license, lack of inspection control, lack of sufficient number of fish inspectors and inspection vessels. The problem of Port Milena, which is today very heavily polluted, has been highlighted, and which was once the center of biodiversity and the main hatchery and eel feeding facility.

The conference also announced the conference ” Adriatic Biodiversity Protection “, which will be organized in Kotor by the Institute of Marine Biology, University of Montenegro, from April 7th to April 11th, 2019.

You can see the gallery of workshops from the workshop below: 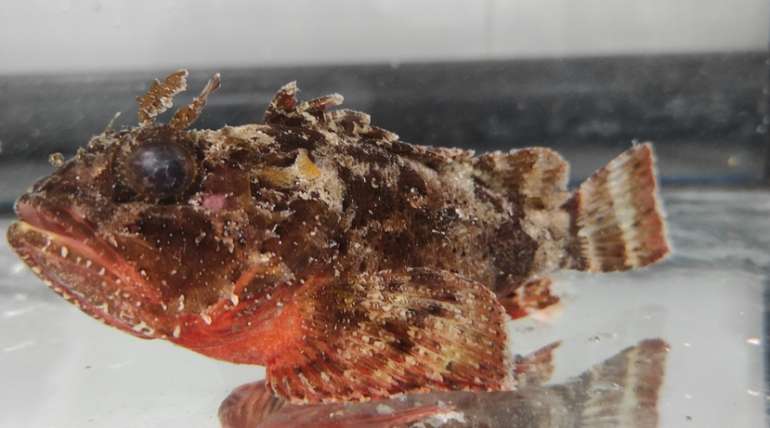 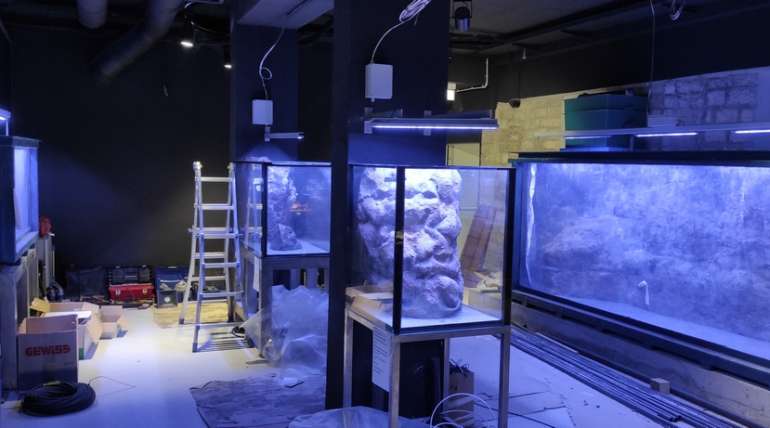